Picture of health and struggle – The SeattleGYM Health Club

Picture of health and struggle 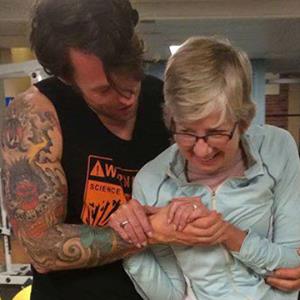 He is the picture of health – she of struggle. But looks can be deceiving.

As Deborah told me, everyone falls somewhere on the bell curve of life. At the top, some people win the lottery. At the bottom, others are like her. But not many others.

Deborah has been diagnosed with Multiple System Atrophy . MSA is rare, it is mysterious, and, above all, it is cruel. It attacks every single system of the body, breaking it down, slowing it down, and eventually shutting it down – except for the mind.

That’s how she met Steve. Deborah has been married for 33 years, has two children, and is the former President and CEO of the Economic Development Council of Snohomish County. She wasn’t accustomed to needing help, but MSA doesn’t care what she wants.

Steve guides her through exercises meant to stave off the disease. He says he’s never seen her be less than brave or wear anything smaller than a smile. Deborah won’t beat MSA, but every day she tries to bruise it.
They both know someday – sooner rather than later – she’ll lose her battle.

But before she goes, she’s saving another soul: Steve’s.

He tells me when he was a young man, he was “a bad person.”

“I hurt people until the day I understood the pain I was inflicting. After that, I worked to fix myself, and then promised that I would try to find people to help as much as I can, to try and remove the pain I inflicted before. Deborah is my outlet for this need. For this reason, I don’t allow her to pay me. The days I get to help Deborah are the absolute best days. I know that I’ve helped someone who truly needs me and my skills.”

As they move through the gym, you will see them like this.

He holds her up.

But they both lean on each other.