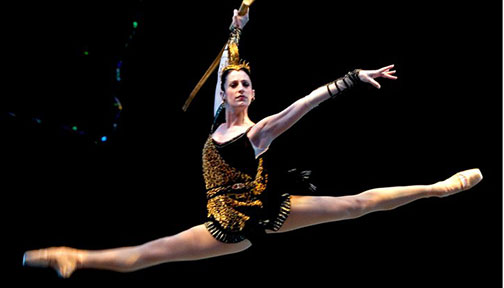 From the Queen Anne and Magnilia News.

Ariana Lallone retired from Pacific Northwest Ballet (PNB) in June 2011, following a long, successful career mostly as a principal dancer. Before taking her final bow at Seattle Center’s McCaw Hall, Lallone knew where she would perform her next role, and the venue could not have been any closer. All she needed to do was cross the street, literally.

That fall, Lallone made her first appearance with Teatro ZinZanni in “Bonsoir Liliane,” an homage to Liliane Montevecci, a stage star who had started her career as a ballerina. Lallone played a young Montevecci.

ZinZanni associate artistic director Reenie Duff had hand-selected her for the role. Duff had previously seen her perform in “Lambarena” at Bumbershoot, and that performance had given Duff the idea of including a ballerina in an upcoming ZinZanni production.

“Her lines stuck with me,” Duff said recently. “In the back of my mind, [I thought,] Wouldn’t it be great to have a ballerina in here? See her feet close up?’ ‘Bonsoir Liliane’ would be the first chance to put a ballerina in the show.”

Duff and Lallone would run into each other at Seattle Center, not long after Lallone learned of her retirement at the end of the 2010-11 season. Duff seized the moment and asked if she could take a leave of absence from the ballet to play a role in “Bonsoir Liliane.” Lallone’s jaw dropped, according to Duff.

Lallone knew she would retire from PNB the next year and could see a new opportunity. (At the same time, Duff was unaware since a public announcement by PNB had not yet been made.) They later met for coffee.

Lallone says now it was a matter of “when one door closes, another door opens.” She accepted the offer and took the leap. Her performing career would continue after all, just in an entirely new format and on a completely different kind of stage — something she had only dreamed of.

Looking back, Duff said, “I had such confidence in her as a performer. She’s so open and willing to take risks and hungry and willing for challenge.”

Almost five years later, Lallone has now appeared in four ZinZanni shows and four of its children’s productions. “Bonsoir Liliane” gave her a taste of ZinZanni’s cirque-comedy-cabaret world, and she wanted more.

Soon thereafter, she began working with an aerial coach on an act incorporating a lyra hoop. In 2013, she introduced her lyra act in “Dinner at Wotan’s,” in which she played Freya, Nordic goddess of love. One critic called her performance an “aerial dance of rare beauty.”

She’s taken her ballet-ic turning, jumping and balancing skills into the air, using a lyra as a kind of a substitute partner. In “Be Italian!,” ZinZanni’s current show, she executes luxurious backbends and other poses. The lyra swings from one side of the spiegeltent to the other with her in it or below it, and the effect is stunning.

Comparing her days as a ballerina with where she is now, Lallone said, “I was always the person being created on. You come into ZinZanni with your own act…. While appearing in a show, I’m working on choreographing the next one.”

With characteristic determination, she continues to work on expanding her repertoire on the hoop, as well as other performing skills. She says of comedy and improv, “I learn from watching [fellow performers] Christine [Deaver] and Joe [De Paul]. Every night is different.”

At present, Lallone has a lead role, starring opposite comedic tour-de-force Deaver, in “Be Italian!” The show tells the story of 1980s Jersey girls and sisters Gina and Tina Romanelli (Lallone and Deaver, respectively). Their father has left them his Italian restaurant, which they are turning into a nightclub. Much zaniness and many funny lines ensue in getting to the opening of the new Romanelli’s.

According to Tina, a Jersey girl’s hairdo can be used as a metric of her holiness.

“The bigger the hair, the closer to God,” she says, while transforming a volunteer from the audience into a Jersey girl with big hair, thanks to a wig and gobs of costume jewelry.

When Lallone is not performing or working on her next show, she collaborates on ZinZanni’s children’s shows. She recently had a rehearsal for “Rock this Way,” ZinZanni’s latest kids production, which opened last Saturday, April 9. These productions are not only made for children but also feature young performers.

Five years following her introduction to Teatro ZinZanni, Duff says of Lallone, “She’s assimilated into this clown world. She fits right into the family. It’s a good marriage.”

Lallone is also happy with her new artistic home and very appreciative of the fact she’s been able to continue working in Seattle, where she’s lived for nearly 30 years.

Her good fortune is not lost on her. Where else could fans from PNB see her so easily? All they need to do is cross the street.